Some of the most common type of games I work on involve the player moving the character around the scene with a third person camera perspective.

This style of game requires a script that lets the player control where the character moves and where the camera is looking. The character controller is the first thing I make when developing one of these games. Let’s explore some excerpts from the first one I ever made to the last one I worked on, and how my approach has evolved.

Beginnings in Deep in Sheep! 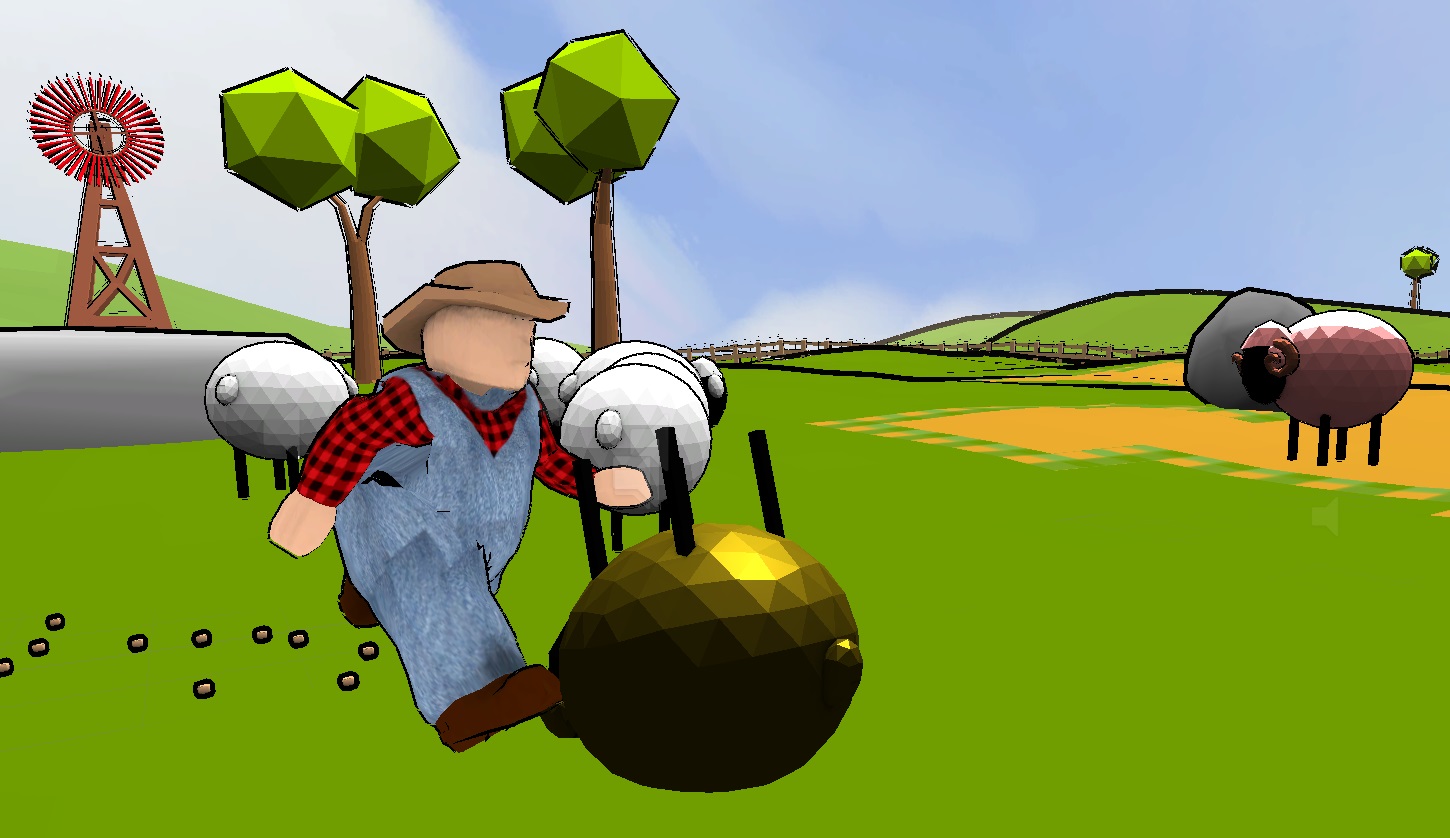 I was pretty heavily involved in VGDev, the video game development club, at Georgia Tech. As a whole, the club makes around five to seven games a semester, each lead by a different Project Lead.

Deep in Sheep! was the second game that I lead and developed at VGDev. In short, its a sheep soccer game about herding the most sheep. The main fun of the game is catching and rolling the sheep around before your opponent does.

Here is what the main update function of the Character Controller looks like, broken up:

We get the inputs and cache them.

I want the player to move in the direction the camera is facing when the player presses the forward key, which would give the variable dx a positive value.

The camera can be anywhere around the player, but I only want the direction the camera is facing to affect the character’s horizontal motion. To accomplish this, I had to zero out the vertical component of the camera’s forward vector.

Since Unity3D’s coordinate system uses the y-axis as the vertical axis, this is the component I zero. Using some linear algebra, we get x and z components of the camera’s direction vector.

Here is one of the areas that has gone through the most change over the different iterations.

Essentially, all these over complicated statements boil down to scaling the input from the player in the direction the camera is facing. We can see attempts at trying to get this code to play nice with Unity3D’s physics from all the references to the rigidbody’s current velocity.

The final section of the function sloppily applies the over engineered velocity to the Character’s current velocity.

The main feature of this controller is that I tried to achieve is that the character will move in the direction the camera is pointed as discussed earlier. The nice side effect is the player can hold forward on the movement axis and control the direction of the character by turning the camera.

In general, this character controller is over complicated. It did get the job done and got players to where they wanted to go. Probably best that they could not see what was going on under the hood. The original plan for Deep in Sheep! included networked multiplayer. My teammates and I quickly discovered that adding multiplayer would be too much work with too little time left before our deadline. A few months after we were done, I decided to prototype a multiplayer player controller.

In many ways, my approach in this project was a few steps forward, a couple steps back. I did eventually get networking working, but I started to get stuck on simplifying and enhancing my previous character controller.

What resulted will look confusing, especially if you are unfamiliar with Unity3D’s UNET, their networking high level API. The movement code is split between the update function and the client input dequeue function. The player controller’s update needed to be split into two functions to accommodate multiple player controllers running at once.

The inputs are taken during the update function and then are sent to the server. The server enqueues these messages and as the server gets to them, it applies the inputs to the character.

We still have mostly the same input caching from Deep in Sheep!. Now, there is a third movement input for jumping. Also, there are ternaries to prevent moving while in the air, which is a stylistic choice. The last parts of the update function transfer the player’s inputs to the networking logic.

The second function begins with selecting a stateToUse, a struct with the inputs from earlier or extrapolated inputs. The desired forward direction of the camera is calculated next, same as previously, but now with a reference to a static Vector3 representing the xz-plane.

The final component is similar to the previous controller. Here I moved the character direction modification to a separate function.

I put in my own drag function that reduces the velocity overtime. From what I remember, Unity’s rigidbody drag was not achieving the effect I wanted.

The Manic Meerkat controller, the weird offspring of the two.

Using the speed and jump to determine how the character will move next and in which direction he will face.

Time to actually apply the velocity to change the character’s position.

Finally, we’ll kill the player character if they have fallen off the map.

Root motion sucks, unless you really, really need it.